Do you want to be really happy at work? To create real happiness at work, forget the fun and games and try something much more constructive.

There’s a stack of research out there that suggests that people are neither especially happy at work, nor do they feel overwhelmingly engaged.

In America, according to Gallup, 51 percent of the workforce is not engaged. Nor are they jumping up and down with happiness. In the UK, 60 percent of employees say they’re unhappy at work.

This is important for a couple of reasons

Firstly, let’s be clear about research. If you want to know how many times a day people take a shower, a simple research study will give you a reading, accurate to within 2% if your sample size is large enough.

In the same way, you can find out how frequently people change their cars, which brands of washing powder are the most popular and where people want to take their annual holidays.

These are measurable facts and straightforward to determine and analyse if you’re a professional researcher.

But what is happiness? What does feeling engaged mean? These are abstract ideas that vary in meaning from one person to another and in intensity from one day to another. If you interview a crane driver with a hangover on Monday morning he will be at his grumpiest. The same person on a Friday afternoon is likely to be over the moon. See the problem?

Engaged? Just as woolly. To you and me it might mean that we feel valued and we’re consulted on important decisions. Others may use it as a measurement of how fulfilling they find their daily work routine.

Whatever the real numbers, it’s probably true that feelings of happiness and engagement make employees more productive, though in the absence of tight definitions, we can’t know for sure.

As modern leaders we believe we have a duty to help employees to feel better about coming to work and the traditional HR department solution is to say, “Hey, why don’t we have a team-building day. We can go canoeing, trampolining, have a drumming and mindfulness session, volleyball competition, abseiling and a barbecue at the end – it’ll be fabulous.”

Except for many people it won’t. Those who are shy, overweight, unfit, scared of water or heights or hate barbecues, it will be one of the worst days of their lives.

So what’s the solution?

It sounds way less cool than sliding down a rockface or steering a dugout through whitewater rapids but a day of experiential learning might just do the trick. Without delving too deeply into the academic literature, this extract from a paper by learning experts Linda H Lewis and Carol J Williams sums up the concept:

In its simplest form, experiential learning means learning from experience or learning by doing. It immerses learners in an experience and then encourages reflection about the experience to develop new skills, new attitudes or new ways of thinking.

David A Kolb, considered the pioneer in the field, has distilled it into this simple graphic:

On a practical level, how could this work?

See it as a process, not a one-off event. EL is something that should form part of your company routine. Not too frequently, about four times a year should do it, depending on how you structure the session.

Rather than trying to imagine how it might work in your organization, here’s a rundown of one in which I participated some years ago. (One of our major shareholders was a psychologist, so we were way ahead of the pack in team building and motivation.)

At the time, I was a member of the management group of a multinational advertising agency.

While generally more colourful and flamboyant than, say, the average insurance company executive, everyone was haunted by deadlines written in blood and fractious clients who could kill the business overnight. Tensions were inevitable.

This was before the digital explosion so the personality types were quite different to today’s cut-and-paste generation, and could generally be categorized by their roles and departments.

Thoughtful, analytical but able to think laterally, experimental, interested in – but not bound by – research

With such a mix of personalities thrown into an unstable, volatile environment, the internal wars, though mostly waged quietly, were no less deadly than hand to hand combat in car park.

Eventually, something had to be done. Creative people were accusing client service of sabotaging their work, media types believed creatives had no understanding of spending a client’s money wisely, client service staff complained that the creative work was at odds with the strategic plan and so it went on.

The experiential learning session, though it wasn’t referred to as such, was a brilliantly simple idea.  For a whole day, everyone would do someone else’s job.

The objective was to produce by the end of that day, a single print advertisement, a media schedule and budget, a strategic planning summary and a short presentation document, by going through an accelerated version of the normal process, but with no one remaining in their usual role.

Suddenly creative people were scratching their heads trying to plan a media budget, client service had a batch of semi-literate creative briefs written by media planners dumped in their laps and chaos reigned for eight hours.

By the end of the session, hysteria and exhaustion had settled over everyone but, as they all agreed at the after party, the results were miraculous. Sworn enemies were hugging each other, friendships were sealed and a new singleness of purpose and winning attitude hung in the air like a powerful fragrance.

Of course, not everyone made it work. Some churlish types hung back and didn’t really try to see the world from behind another person’s desk and they quietly found other jobs and disappeared. The teams that remained built one of the biggest and most successful advertising agencies in the southern hemisphere.

That kind of EL activity is impossible in larger and more complex organizations, but with the help of experienced consultants in the field, a custom-built programme will provide a massive boost to productivity and motivation.

Far more so than an interdepartmental volley ball game. 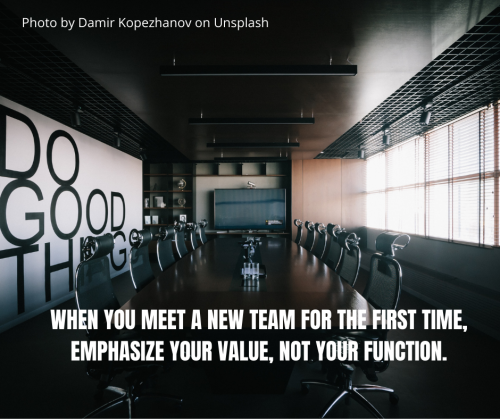 Meeting a new team for the first time

Are you a friend with your team mates?

How to discuss difficult subjects at work